Here is a short film explaining our shocking story. 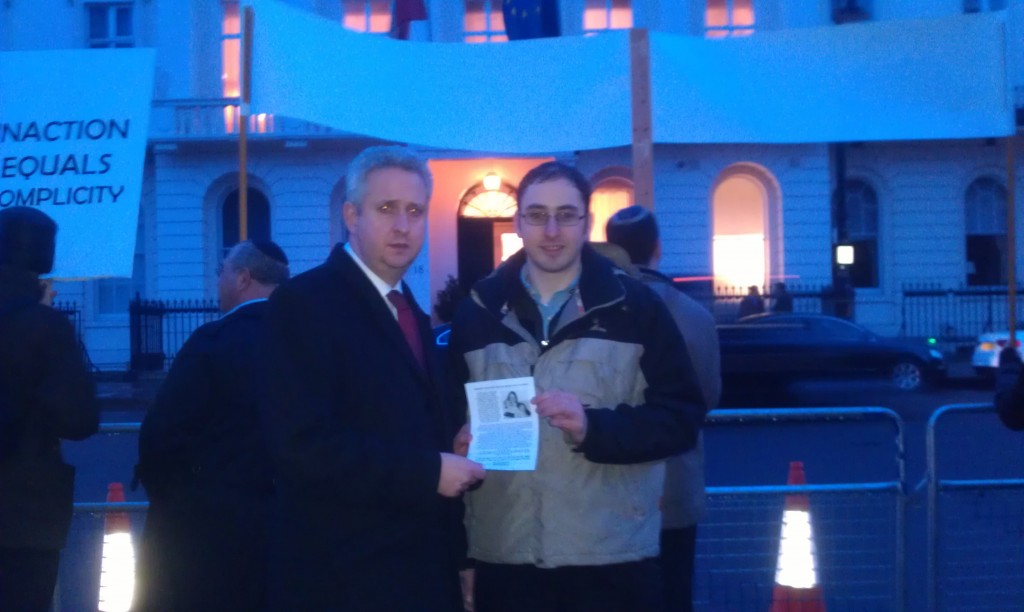 Click here to see ways you can help https://helpbeth.org/how-to-help/ 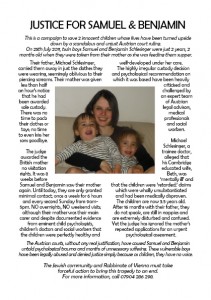 This is a campaign to save 2 innocent children whose lives have been turned upside down by a scandalous and unjust Austrian court ruling.

Text below taken from http://familycourtinjustice.wordpress.com/2014/01/19/austria-family-ct-corruption/

How does it happen that a father with a restraining order issued against him, that was once ordered into supervised visitation because he was determined by the Courts to be a danger to his wife & children, gain sole custody…and now the mother is stripped of custody & allowed only to see her children for a few hours a week?

“Brought to its bare bones, this case is about a violent father who has been violent towards the mother of his children, and other members of the family, and who has been given custody of two children,” Graham Stringer, Labour member for Blackley and Broughton in Manchester (UK) (Source the Jerusalem Post: Jeremy Sharon, link below)

Vienna, Austria: Beth (Alexander) Schlesinger loses custody, and resulting appeal, of her 4 year old twin boys due to family court corruption and cronyism—her ex husband, Michael Schlesinger comes from a prominent family, is an ex doctor, and is said to be “well connected”. There are allegations that Michael Schlesinger met with the judges to influence the custody ruling, and decisions were made behind closed doors without giving Beth a hearing.

Michael is reported to have been mentally and physically abusive to Beth, even attempting to have her committed to a mental hospital by providing false information to medical providers and police; this resulted in Michael being evicted from the home by the police and Beth getting a restraining order against him. Two recent psych evals have conclusively proven that Beth does not have a history of mental illness, and is not currently suffering from mental illness. The Court is refusing an order from the Supreme Court and the Appeals Court to do a psych eval on Michael, and on their children.

Further, a prior court order and a recommendation from social services recommended that Beth retain sole custody. Allegedly, Beth lost primary custody after a closed door hearing between Michael and the judge, and then lost joint custody with this most recent order mandating Beth to a a visit a few hours a week, with transfers being done at a safety center. Living on a teacher’s salary, Beth is struggling to afford the costs of the supervised transfers—she is not allowed any overnights or weekends. The Court has decided that daily contact with their mother is not in the best interest of the children, and ignored persuasive evidence that the children are severely struggling in the custody and care of their father. The children are being cared for by Filipino nurses for up to 12 hours a day—and are considerably regressed to the point they wear diapers, have speech delays and engage in self-harming behavior. These children have a fit, loving mother who is ready and willing to care for them, and has been the primary caregiver until forced out of their lives by judicial order.

In Jan 2014, an appeals court rejected Beth’s appeal on the custody determination. After reviewing this case, British members of Parliament strongly came out against the Austrian courts, accusing them of corruption. MP Graham Stringer, her constituency, and Labour member for Blackley and Broughton in Manchester, has voice similar concerns with the Austrian ambassador about the handling of the case and has contacted the Foreign Office, he remains an outspoken advocate for Beth and her boys.

This is a more detailed summary of the story, compiled from several news sources…

In 2006, Beth Alexander left her comfortable life in Manchester (U.K.) to marry a Michael Schlesinger, who comes from a prominent family, and has worked as a doctor. The couple met in Paris at a conference and after a whirlwind romance, married in an Orthodox Jewish ceremony and settled in Vienna, where Michael resides. Beth is a graduate of Girton College in Cambridge, mastering in Oriental studies and hoped to do her master’s courses at a New York university. Beth abandoned a promising career, to start a family with Michael. The marriage quickly broke down, with Beth reporting threatening and abusive behavior from her husband as early as one week after the nuptials. Beth reported mental and physical abuse, that she felt isolated. Beth gave birth twin boys  in May 2009, but the marriage could not be saved, resulting in a divorce and custody battle initiated in 2010 by Michael.

In 2010. Michael filed for full custody of the twins, who were barely a year old, making false claims that the mother, Beth, is mentally ill to justify his need for sole custody. Michael is alleged to have initiated the help of a friend, who is a psychiatrist, in his attempt to have Beth committed. At one point, Michael is alleged to have called paramedics to sedate Beth, claiming she was mentally ill and out of control. Michael hoped to have Beth committed to a mental hospital, which failed because she was not found to be either mentally ill or out of control. Police removed Michael from the home due to his attempt to commit his wife to a mental hospital by providing false information. Beth later obtained a restraining order. The Courts determined Michael was a danger to Beth and his children, and ordered limited supervised visitation for Michael to visit the boys.

In 2011, the impossible happened—Michael won custody of the boys. Four armed policemen stormed Beth’s apartment, grabbing the boys as they were eating dinner. The traumatic events would become even worse as Michael gained control of the court, allegedly due to being well connected with the judges, and able to sway the sitting judge on the case.

Two separate psychological assessments were conducted on Beth, proving conclusively that she does not suffer from any form of mental illness. But here is the twist—a court ordered psych exam did find that Beth “inadequately interacts and bonds with her children”. The psychologist conducting the exam is said to have no qualifications in adult psychiatry. Now if this report were true, it would have also needed to find that the mental illness was so severe that the patient was too impaired to raise children or posed a risk of harm—suffering from a mental illness does not necessarily mean a loss of custody. Further, certain tests such as the MMPI are not recommended in cases of abuse or trauma because the results could potentially confuse traumatic responses as mental illness, when these symptoms are situational, and a result of severe stressors, not an organic illness or chemical imbalance. Also, if the evaluator conducting the exam is not familiar with the patient’s history or not properly trained to deal with domestic violence and trauma, that could also result in erroneous findings. Another court psychiatrist found that Beth was not mentally ill, and did not suffer from mental health symptoms prior to litigation. A secondary report by a private physician also showed no presence of mental illness—which were all presented as evidence in Court, and dismissed by the judge.

NO assessments have been conducted on the ex husband, Michael, or on the twins. A psych eval would show if the children were struggling with any form of psychological, behavioral or emotional problem—and indicate what the possible causes of that would be, including if a parent was causing harm to the children. The Appeals Court and the Supreme Court have both ordered assessments on the father and on the children, which the current court is not enforcing.

Social services recommended the boys remain in the custody of their mother, as did a ruling from a previous appeals court. Despite this, the Austrian court awarded Michael full custody and granted Beth a few hours a week for visitation, with transfer to be done at a state approved safety center. Beth is allowed a visit every Tuesday and every second Sunday for a few hours with her precious boys, and has to pay €44 for each visit because the Judge said the transfers have to occur in a “neutral place”. The amount of the transfer services has since been increased, and Beth is struggling to afford the costs. The Court is not allowing weekend of overnight visits because “it is not in their best interests”.

Beth claims her sons are “in a terrible state” and that there have been reports of the children self-harming by the kindergarten teacher, and other reports from concerned neighbors who hear screaming coming from the house they reside with their father. The children also have problems with delayed speech development and have struggled to potty train at the same level as other children their age. The Court has determined daily contact with their mother is not in the “best interest” of the children, yet the children are struggling in the care of their father, and are showing signs that they are not meeting developmental markers, and exhibit distress while in their father’s custody. These kinds of behaviors would make it crucial for the Court to order a psychological evaluation. If problems persist in kindergarten, it is likely the school will step in to do in-school testing to determine if the boys qualify for special education services.

Beth believes her “well connected” ex husband has unfairly influenced the Court’s decision. MP Graham Stringer, her constituency, and Labour member for Blackley and Broughton in Manchester, has voice similar concerns with the Austrian ambassador about the handling of the case and said he will be contacting the Foreign Office. Stringer referenced allegations that the husband of the High Court judge is friendly with the family of Michael Schlesinger, and through these connections, the Schlesinger family met with the sitting judge on the case prior to the hearing and have influenced the outcome of this case. There are also  allegations that meetings between the judges and Michael occurred behind closed doors, changing Beth’s custody and visitation arrangement without giving her a hearing.

In November 2013, Beth lodged her final appeal in the case. In January 2014, Beth received the results of the appeal that simply stated “rejected”. It is highly unusual for an appeals court to issue such a one-word determination. After reviewing this case, British members of Parliament strongly came out against the Austrian courts, accusing them of corruption and continue to advocate for Beth and her children.

After winning sole custody, Michael has hired Filipino nurses to care for the twin boys. The children are considerably regressed to the point they wear diapers, have speech delays and engage in self- harming behavior. Beth vows to keep fighting for their safe return, and has started a blog to offer updates and a PETITION.

“Agony for Mother after losing her children in ‘barbaric’ Austrian ruling” by Daniel Johnson, “The Telegraph”, 11/06/2013: http://www.telegraph.co.uk/news/uknews/law-and-order/10430682/Agony-for-mother-after-losing-custody-of-children-in-barbaric-Austrian-ruling.html

On 13th March 2013, over a hundred protesters gathered outside the Austrian Embassy to demonstrate on behalf of the twins and to hand in our petition of nearly 3000 signatures. A film crew asked a number of the activists for their thoughts regarding the courts’ handling of this case and the accountability of the Austrian government to ensure a fair Judicial system:

Concluding remarks from the speech made by the Austrian Federal President DR HEINZ FISCHER at the 75th Commeration ofAustria’s “Anschluss” to Germany: 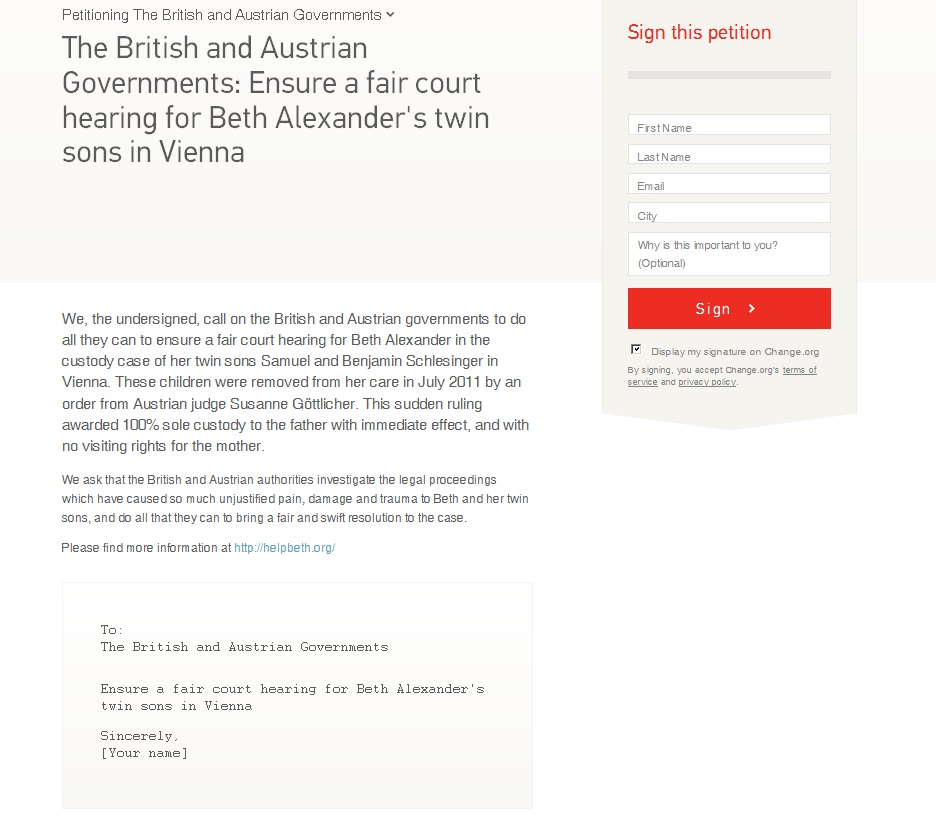